“One Night of Queen” Concert at Tuacahn

Utah’s Tuacahn Amphitheater is known for featuring great music acts. True to this reputation, Tuacahn welcomes Gary Mullen and The Works, who will pay homage  to the legendary rock group Queen. Anyone who is looking for great Spring Break entertainment, loves music, or just appreciates a fantastic show won’t want to miss this event. 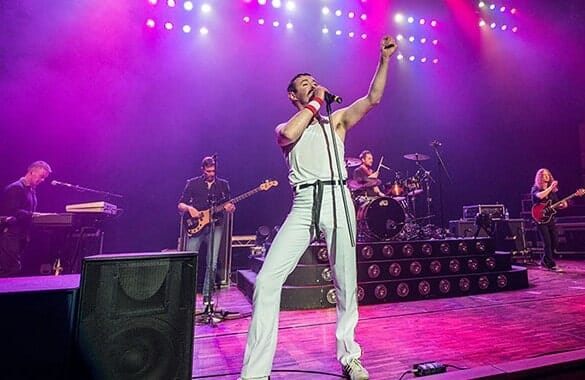 One Night of Queen takes place at Tuacahn on March 18 and, as the title indicates, Gary Mullen and The Works will perform for one night only. Gary Mullen is the winner of 2000’s “Stars In Their Eyes” competition, earning the most votes ever received in the show’s history. After his victorious win, he formed a band called The Works and went on tour paying tribute to the music and artists of Queen. When looking at Gary Mullen on stage, it’s hard not to feel like you’re really looking at Freddie Mercury. Gary Mullen and his band do an excellent cover, and audiences throughout Europe, South Africa, New Zealand, and the UK have rocked out at the outfit’s sold-out shows.

This performance at Tuacahn marks the group’s return to the United States. One Night of Queen doesn’t just provide the look of the rock icons, audiences will also get a spectacular recreation of Queen’s sound and unforgettable showmanship. As far as tribute bands go, Gary Mullen and The Works get it right and go all out to engage and entertain during each performance. One Night of Queen has not only been praised for the music and how well Gary Mullen mimics Freddie Mercury’s appearance and stage persona, but for the show’s sound quality and light show.

One Night of Queen starts at 7:30pm on March 18, 2016. Tickets can be bought online and range in price from $19.50 to $29.50. When ordering online at Tuacahn’s website, you have the option of picking your seat number and location, theater section, and whether or not you’d like aisle seating, so buy soon! Good seats will go fast.

There are a number of events going on in the St. George area this Spring Break, but few promise as good a time as One Night of Queen. Tickets are selling out fast — this performance is one that’s a must-see for rock music fans.